Home
Stocks
The Tell: Forget the election, stock-market investors should worry more about the first quarter
Prev Article Next Article
This post was originally published on this site

Investors may be sweating the November presidential election, but the stock market’s true test is likely to come in the current quarter, says one Wall Street bull.

“Traditionally, you’ll see the market price in the outcome of an election about six weeks prior to that election,” Jeffrey Schulze, investment strategist at ClearBridge Investments, a money manager with around $147 billion in assets under management, told MarketWatch in an interview on Monday. “Leading up to that election, [the market] is really going to focus on the economy — is that economy healthy or slowing down or in a recession.” 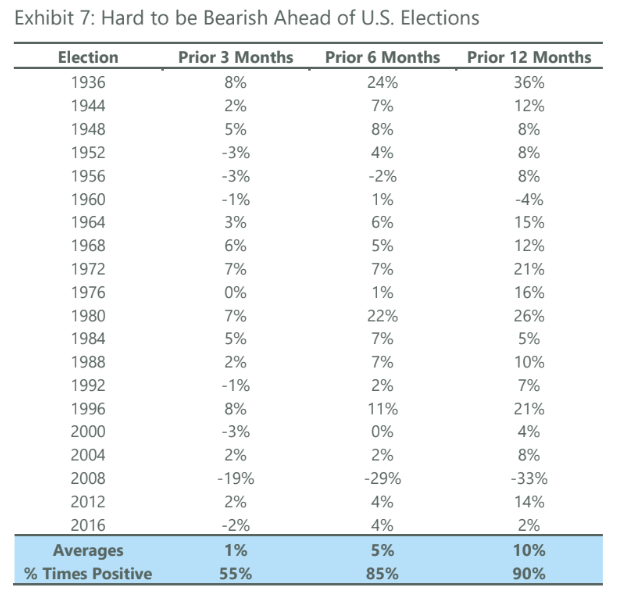 More pressing for investors is the question of whether the economy could suffer a significant growth scare in the current quarter.

Schulze, in a note, recalled that ClearBridge’s own recession-risk dashboard turned yellow back in June 2019, where it remains. On average, an overall yellow signal has turned back to green — signaling a soft landing — or turned red — signaling recession within six to nine months. That also lines up with how the S&P 500 performed in the wake of a third interest rate cut by the Federal Reserve. The Fed, which ended its hiking cycle early last year, delivered a third rate cut in October.

The table below illustrates the market’s performance in the wake of previous third cuts. Twice — in 1996 and 1998 — the S&P 500 delivered positive returns in the following six months. Two other times — 2001 and 2007 — stocks fell. 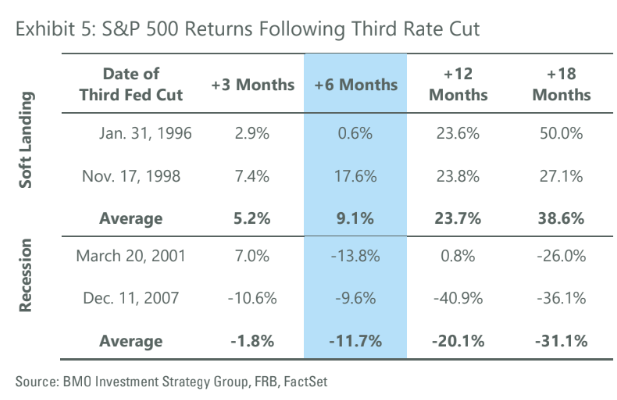 Investors may be tempted to take comfort in the fact that the yield curve is no longer inverted. They shouldn’t, Schulze said. An inversion refers to the phenomenon when the yield on longer dated U.S. Treasurys, particularly the 10-year note, trades below the yield on short-dated Treasurys, particularly the 2-year note or the 3-month bill. Past inversions have been highly reliable harbingers of recession, albeit with a long lag.

Read: 5 things to know about an inverted yield curve

While those measures of the curve are no longer inverted, Schulze noted that past recessions saw the curve re-steepen before the economic contraction occurred.

That’s not to say that ClearBridge is bearish. Schulze contends stocks are in a long-term, secular bull market and suspects that investors, in fact, may be underestimating upside potential for stocks in the year ahead provided near-term pitfalls can be avoided.

Indeed, Schulze pointed to the mid-1990s as offering an applicable analogue for the current environment. The Fed, in 1994-1995, followed a tightening cycle with a series of rate cuts that produced a soft landing and allowed the bull market in equities to continue. 1996 could offer something of a model for the current year. That year, which was also an election year, saw the S&P 500 follow a 34.1% return with a 20.1% gain.

The S&P 500 saw a total return of 31.5% in 2019. Fuel for further gains could come from investors who sat out much of last year’s rally, he said, a phenomenon demonstrated by heavy outflows from equity funds and heavy inflows into fixed-income and money-market funds. A net $1.1 trillion net difference in inflows between the two classes is the largest in market history, Schulze said.