Home
Stocks
The Fed: Fed’s Kaplan worries that investors got green light to take more risk from recent interest-rate policy
Prev Article Next Article
This post was originally published on this site 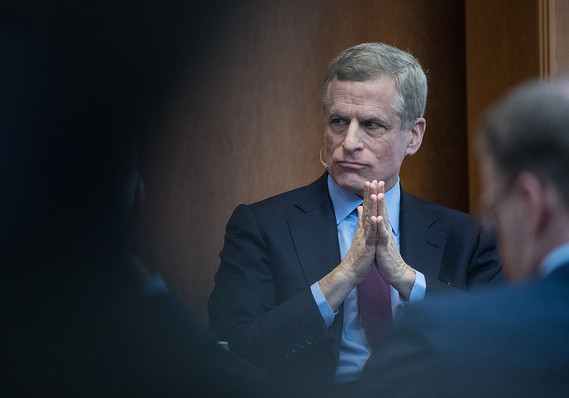 Recent Federal Reserve interest-rate moves seem to have given investors a green light to buy risky assets and this is a concern, said Dallas Fed President Robert Kaplan on Wednesday.

Asked, in an interview on Bloomberg Television, if he worries that Fed policy decisions have given investors “a green light,” Kaplan replied: “Yes, I do.”

First, interest rates are lower as a result of the central bank’s three rate cuts in 2019, he said.

Secondly, investors have the “perception” that the bar is higher for future rates hikes, Kaplan said.

“I don’t know I completely agree with that,” he added.

The third issue is that the Fed has grown its balance sheet to quell turmoil in the short-term money market.

“I’m conscious all three of those actions are contributing to elevated risk asset valuations and I think we ought to be sensitive to that at the FOMC and I certainly am,” he said.

While the Fed’s recent purchases of short-term Treasury bills is not technically quantitative easing (QE) because the Fed is not buying securities all along the yield curve, it is having similar effects, he said.

“My own view is [buying bills] is having some effect on risk assets. It is a derivative of QE in that when we buy bills and we inject more liquidity, it affects all risk assets,” Kaplan said.

“Growth in the balance sheet is not free. There is a cost to it,” he said.

While it was important for the Fed to take action in the repo market, he said it shouldn’t last forever.

“It is very important that we come up with a plan, and communicate a plan for winding this down and tempering balance sheet growth,” he said.

The Fed started lending funds to the money market through overnight and longer-term repo operations in last September after a sudden spike in short-term borrowing costs after liquidity in the market suddenly dried up. The New York Fed announced on Tuesday that this lending would continue at least into mid-February.

The Fed is also discussing the possibility of a standing repo facility.

In a separate speech Wednesday, Philadelphia Fed President Patrick Harker said the next steps regarding the balance sheet “are still very much in the discourse, rather than the decision, phase.”