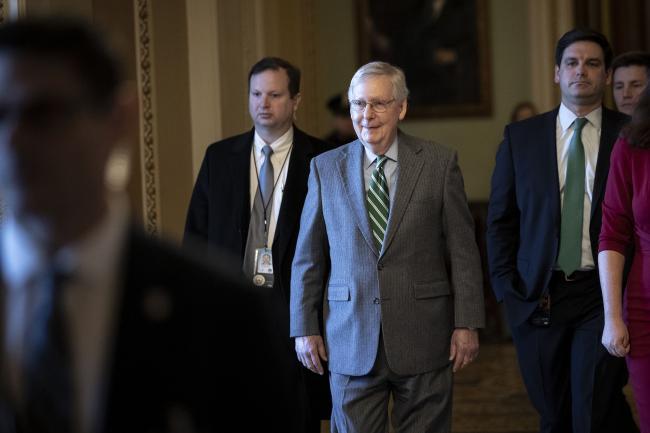 (Bloomberg) — The Senate approved President Donald Trump’s U.S.-Mexico-Canada free trade agreement on Thursday, handing the president a major political win on the same day senators will be sworn in as jurors in his impeachment trial.

The Nafta overhaul, Trump’s top legislative priority for the past year, cleared the Senate on an 89-10 vote and now heads to the president for his signature. The U.S.-Mexico-Canada agreement passed the House in December on a bipartisan 385-41 vote the day after the Democratic-led chamber voted to impeach Trump.

The Senate vote is also moving in tandem with the impeachment process, coming just a few hours before Chief Justice John Roberts is sworn in to preside over the trial. Senate Majority Leader Mitch McConnell applauded the trade deal as a rare moment of bipartisan cooperation.

Democrats, led by Speaker Nancy Pelosi, finally got behind the trade agreement in December after more than a year of wrangling with the Trump administration over changes to provisions regarding labor, the environment, pharmaceuticals and the overall enforcement of the deal. The changes won over Democratic senators like Sherrod Brown and Elizabeth Warren who criticized previous free trade deals.

“Despite the fact that it includes very good labor provisions, I am voting against USMCA because it does not address climate change, the greatest threat facing the planet,” Schumer said in a statement before the vote.

A handful of free-trade conservatives like Pennsylvania GOP Senator Pat Toomey also voted against the agreement for creating new wage requirements in the auto industry, among other market interventions.

McConnell initially said the Senate wouldn’t act on the USMCA until it had finished with Trump’s impeachment trial, but Pelosi’s decision to delay sending the impeachment articles to the Senate created a window for the vote this week. The Senate Finance Committee and six other panels rushed to approve the deal since lawmakers returned from their holiday recess last week.

Passing this revision of the North America Free Trade Agreement gives Trump a victory to tout in his election-year State of the Union address scheduled for Feb. 4. While the USMCA is projected to add just 0.35% to GDP after six years, signing this agreement and the first phase of a China trade deal will relieve some economic uncertainty, helping Trump’s pitch to voters based on the strength of the U.S. economy.

For Democrats from narrowly divided or Republican-leaning districts, the USMCA allows them to show constituents that they’re working with the president and doing more than impeaching him. They have highlighted the labor enforcement provisions as a model for future free trade agreements.