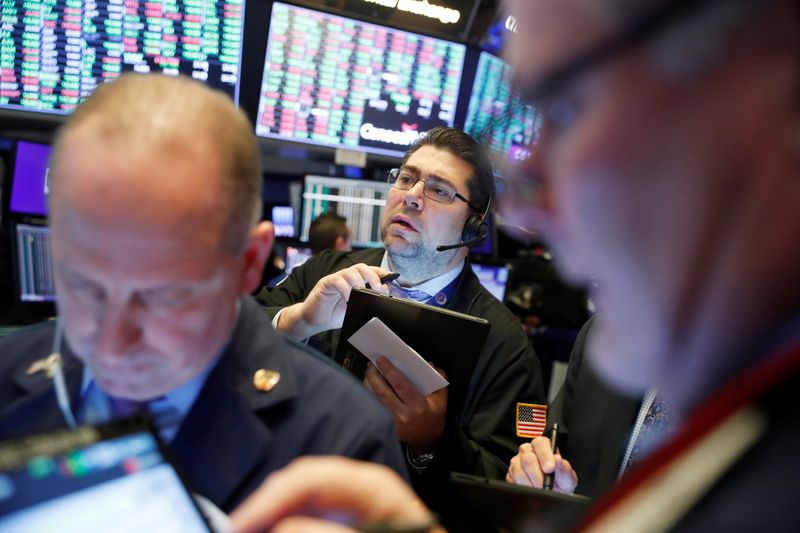 © Reuters. Traders work on the floor of the New York Stock Exchange shortly after the opening bell in New York

NEW YORK (Reuters) – The and the Nasdaq closed at record highs on Monday as Chinese workers and factories slowly returned to business following a Lunar New Year holiday that was protracted by the deadly coronavirus outbreak.

Worries over the coronavirus kept market participants on edge, with the death toll rising to 908 and the World Health Organization (WHO) warning that new cases outside of China could be “the spark that becomes a bigger fire.”

“The money that China injected into its economy is finding its way around the world and you have a “buy anything and everything’ mentality,” said Paul Nolte, portfolio manager at Kingsview Asset Management in Chicago. “It’s an index buy and it’s growth verses value.”

“The U.S. is seeing some economic growth,” Nolte added. “We’re the cleanest shirt in the dirty laundry, globally, and it gives investors another reason to buy U.S. stocks.”

Tesla (NASDAQ:) Inc’s stock rose 3.1% after its Shanghai factory resumed production, and iPhone maker Foxconn re-started a key plant in China with 10% of its workforce.

That is cold comfort for Apple (NASDAQ:), whose iPhone sales in China could plunge by as much as 50% due to the virus, according to analysts.

The fast-spreading coronavirus has now caused more deaths than the 2002-2003 SARS outbreak, and has affected a broad range of companies and sectors.

Of the 11 major sectors in the S&P 500 all but energy ended the session in the black, with technology and consumer discretionary shares posting the largest percentage gains.

Fourth-quarter reporting season is approaching the final reel, with 324 of the companies in the S&P 500 having reported. Of those, 70.7% have beat Street estimates, according to Refinitiv data.

Advancing issues outnumbered declining ones on the NYSE by a 1.50-to-1 ratio; on Nasdaq, a 1.46-to-1 ratio favored advancers.

Volume on U.S. exchanges was 6.60 billion shares, compared with the 7.66 billion average over the last 20 trading days.