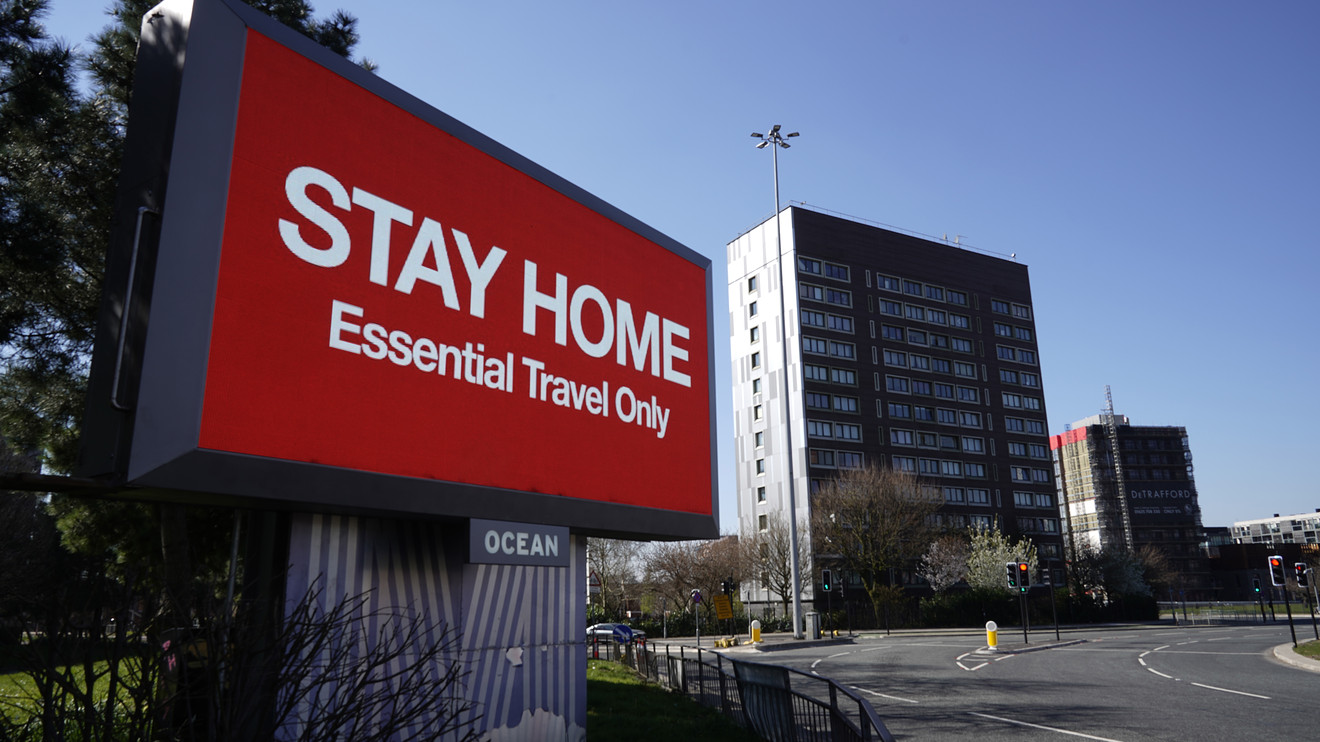 The number of global cases of the coronavirus that causes COVID-19 edged closer to half a million on Thursday, and U.S. jobless claims soared to a historic level after workers were laid off or furloughed as non-essential services were ordered to close.

The number of Americans who applied for unemployment benefits last week rocketed to a record 3.28 million, easily surpassing the previous record rise of 695,000 in 1982. Just a week ago, claims totaled 282,000 and stood near a 50-year low.

The Senate approved an unprecedented $2 trillion relief bill that will head to the House of Representatives for a vote on Friday. The bill includes small business loans, loans for industries, cities and states and relief for individuals.

But New York Gov. Andrew. Cuomo said the package “terrible” for New York on Wednesday. Cuomo, who has alternately criticized and praised the federal government’s response to the crisis, said only $3.1 billion was earmarked to help the state with a steadily widening budget gap, and is not proportionate to what other states with fewer patients are receiving.

New York remains the epicenter of the COVID-19 pandemic in the U.S. with more than 30,000 people testing positive as of Wednesday and 285 deaths. Cuomo said the measures taken to encourage New Yorkers to stay at home and to comply with “social distance” guidelines was showing signs of slowing the spread of the virus. Westchester County, which had one of the worst clusters of the illness in the state, was showing a slowdown in number of infections, he said.

New York City continues to bear the brunt of cases and deaths in the state. The city tally came to 3,223 cases on Wednesday and 280 deaths. Mayor Bill de Blasio said he is taking measures to stop people gathering to play basketball by removing hoops at 80 of the city’s 1,700 basketball courts where games were still being played. The city will close 26 blocks to vehicles on Friday as another way to give people the space to move while observing social distance.

Related: To solve ventilator shortage, U.K. government is turning to thousands of inventors

Globally, the number of cases of COVID-19 comes to 487,646 and at least 22,030 people have died, according to the latest data from the Johns Hopkins Whiting School of Engineering’s Centers for Systems Science and Engineering. At least 117,749 people have already recovered.

See now: Germany and the Netherlands seem to fight off the virus better than most — here’s why

Other countries with large numbers of cases include Iran, with 29,406 cases, 2,077 deaths and 10,457 recoveries. South Korea, which has been admired for its widespread testing and other containment efforts, has 9,241 cases, 126 deaths and 4,144 recoveries.

Check out: MarketWatch series: Dispatches from a pandemic

Companies announced another round of measures to combat the impact of the illness on Thursday, including salary cuts for executives, drawdowns of credit facilities, suspended dividend payments and stock buyback programs.

The stock market rallied on hopes the relief bill will help salvage those sectors of the economy that have been most ravaged by the virus so far, including airlines and retailers.

See also: Getting crushed in this market? One look at Warren Buffett’s portfolio and you might feel a lot better about yours

Here’s what companies are saying about COVID-19 on Thursday:

• Caterpillar Inc. CAT, +2.35% is withdrawing financial guidance for 2020 that was offered on Jan. 31, because of the uncertainty being created by the virus. The Deerfield, Ill.-based maker of diggers and dozers said most of its domestic operations continue to run and it is also operational in those parts of the world where it is still permitted by local authorities. The company is confident is financial position remains strong, with $8.3 billion of cash on its balance sheet at the end of 2019, and access to $10.5 billion worth of credit facilities.

• Analog Devices Inc. ADI, -3.17%, a chip maker, is withdrawing its forecast for the fiscal second quarter ending May 2. “The economic and social effects caused by COVID-19 are currently creating supply chain disruption and uncertainty around future demand,” the company said. “While customer demand in the quarter has been resilient, it has become increasingly difficult to quantify and forecast the business impact of COVID-19.” The company will provide further updates on its next earnings call.

• Abercrombie & Fitch Co. ANF, +6.65% is drawing down $210 million from its revolving credit facility. The clothing and accessories company said it withdrew most of its money from Rabbi Trust last week, equal to about $50 million. As of Feb. 1, 2020, Abercrombie had $671 million in cash and cash equivalents. All of the company’s stores outside of the Asia-Pacific region will remain closed until further notice.

• Bristol-Myers Squibb BMY, +6.71%  had good news when the Food and Drug Administration approved Zeposia, its oral multiple sclerosis drug. However, the company is delaying the launch of the drug as a result of the COVID-19 outbreak, saying doing so is in the best interest of patients, customers, and employees. The drug outperformed Biogen’s BIIB, +5.54% Avonex in two clinical trials when examining the annualized relapse rate and the number and size of brain lesions, the company said. The European Medicines Agency is expected to make its decision on Zeposia in the first half of the year.

• Tailored Brands Inc. TLRD, +10.56% will furlough all U.S. store workers and a “significant portion” of its distribution center and office workers after extending its store closures until May 4. Tailored Brands’ portfolio includes Men’s Wearhouse and Jos. A. Bank. The company’s executives, including Chief Executive Dinesh Lathi, and full-time workers will also be taking tiered pauty cs. Pay for Lathi and the board will be halved.

• Wendy’s Co. WEN, -0.69% saw same-restaurant sales slide 20% in the week ending March 22. For the quarter-to-date, same-restaurant sales are up 2.8% after its breakfast launch drove sales up 15% in its first week. Wendy’s is operating drive-through and digital ordering at most of its restaurants, with drive-through comprising 90% of the business. About 3.5% of all system restaurants are closed and the company has drawn down its full $120 million revolving financing facility, bringing its cash on hand total to more than $340 million. The company is suspending stock buybacks and reviewing its capex plans and pulled guidance for 2020 and a longer-term view for 2021 to 2024. To help franchisees, Wendy’s is eliminating its incremental marketing spend for its new breakfast menu, deferring royalty payments and taking other measures.

• Tapestry Inc. TPR, +3.09%, parent to the Coach, Kate Spade and Stuart Weitzman brands, is extending store closures in the U.S. and Europe for an additional two weeks, keeping them shuttered through April 10. The company will suspend its dividend from the fourth quarter and is halting its share buyback program as it works to conserve cash. The company is tapping $700 million of its $900 million revolving credit facility. The company closed calendar 2019 with $1.2 billion in cash and short-term investments. The company is donating 15,000 face masks to hospitals in the U.S., the U.K. and Spain.

• Alaska Air Group Inc. ALK, +9.38% is cutting its flight schedule by about 70% in April and May as it deals with a sharp drop in passengers. Alaska has seen bookings drop more than 80%, and said flight reductions will be “substantial” for at least the next several months. The airline is suspending its cash dividend, has drawn $400 million on a line of credit and secured an additional loan for $425 million. CEO Bradley Tilden will forgo salary, annual pay raises for employees will be suspended and the company will solicit voluntary leaves of absences from workers.

• Apple Inc. AAPL, +3.13% is considering a “months” delay of its iPhone launch in September because of issues related to consumer demand during the coronavirus crisis, according to the Nikkei Asian Review. The newest Apple phone is expected to support ultra-fast 5G networks. Apple declined to comment on the Nikkei report.

• Nordstrom Inc. JWN, -0.52%  is planning to extend its store closures for at least a week through April 5, a move that affects all U.S. and Canada stores and the various brands operated by the company. The company will offer store employees pay through April 5 but at that point it plans to furlough a portion of corporate employees for six weeks. The impacted employees would continue to receive enrolled benefits, the company said. Senior executives will forgo a potion of their salary and the CEO and chief brand officer, Erik and Peter Nordstrom, respectively, will decline a salary from April through September. The company’s board is also forgoing its cash compensation for six months.

• Lowe’s Cos. LOW, +7.64% said Wednesday it will hire 30,000 new workers and committed $100 million “to support the emerging needs” of employees, customers and communities amid the pandemic. Lowe’s will close stores earlier to allow more time to sanitize them, and will give full-time hourly workers a $300 bonus and part-time workers a $150 bonus. The home-improvement retailer will also extend its paid sick-leave program. Its $100 million commitment will include $10 million in donations to medical professionals, he said.